To share your memory on the wall of Raymond Meyerink, sign in using one of the following options:

Ray Meyerink was born on August 21, 1937 to Gerrit and Jeanette (Bolt) Meyerink in Platte, SD. Ray graduated from Platte Christian School. On July 31, 1956 he was united in marriage to Muriel (Cady) Meyerink in Harrison, SD. To this union five children were born. He was honorably discharged from the National Guard in 1957.

Ray was in construction from a young age with his brothers. In 1970 he purchased a lumber company which came to be known as Meyerink Lumber and Supply. He enjoyed golf, fishing, hunting, gardening and woodworking. He loved spending time with his children, grandchildren and great-grandchildren.

Ray loved the Lord and had great assurance of God’s promises to him. He was very involved in the Platte Christian Reformed Church. He was a leader in the youth group Prayer and Share, he was a member of the Consistory and was an active in Gideons. He was also instrumental in the construction of the new CRC in Platte. He and Muriel continued their work volunteering with the CRWRC and providing disaster relief to many places in the US after their retirement.

To plant a memorial tree in honor of Raymond Meyerink, please visit our Heartfelt Sympathies Store.

We encourage you to share your most beloved memories of Raymond here, so that the family and other loved ones can always see it. You can upload cherished photographs, or share your favorite stories, and can even comment on those shared by others.

Plant a Tree in Memory of Raymond
Plant a tree 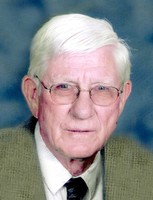