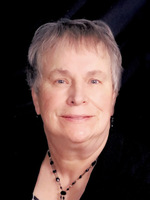 Loretta Estella Blasius, 85, of Kimball, SD passed away Monday, April 4, 2022 at her home. Funeral Mass is 10:30 AM Friday, April 8, 2022 at St. Margaret’s Catholic Church in Kimball. A Committal Service at St. Margaret’s Catholic Cemetery will take place at a later date. Visitation will be held at the church from 5:00 – 7:00 PM Thursday, April 7, 2022 with a 7:00 PM Wake Service and Rosary. Memorials in Loretta’s honor may be directed to: St. Margaret’s Catholic Daughters, PO Box 137, Kimball, SD 57355. Mount Funeral Home of Kimball is assisting with arrangements. Expressions of sympathy may be extended to the family through mountfuneralhome.com. The funeral will be live-streamed under "Photos and Videos" on the funeral home website (Webcasting) and through “Mount Funeral Homes” Facebook page.

Loretta Estella (Kopke) Blasius was born to Charley and Gertrude (Moross) Kopke on August 24, 1936 in a homestead shack in the Badlands near Weta, SD. She was the eighth of nine children and also had a half-brother, Raymond. The family moved to Jerauld County when she was four years old. She attended school and graduated from Wessington Springs, SD in 1954. After graduation, Loretta worked at Tamblyn Printing Co.

On April 11, 1956, she married Robert “Bob” Blasius of Kimball, SD. To this union, 11 children were born, four sons and seven daughters. Loretta led Jr. Catholic Daughters for many years and taught CRE for 18 years. She helped start and taught the Kimball Farmers Union Youth Group and also worked with the 4-H youth. In 1984, Loretta and daughter, Nancy purchased Ray’s Café in Kimball, SD which they then operated as the Ponderosa Café. After the Ponderosa was sold, Bob and Loretta resided in Mitchell for 15 years. During that time she worked at Dakota Mental Health, County Fair and Countryside Living. When returning to Kimball, she enjoyed spending time with her children, grandchildren, great grandchildren and husband of 65 years.